After being released from Prison in 2007 with a 'New Heart and a New Spirit', John Lawson had a burning desire to share his new found faith with others. He joined a local church where he was baptised and began to serve as often as he could. After a year he had the opportunity to go on mission which further ignited his passion to reach the lost. He formed Escape Ministries in July of 2008 and began serving the Lord in a full time voluntary capacity. By The Grace of God John has had the honour to share the Gospel in more than 25 countries in some of the toughest prisons on the planet as well as schools, churches, community events, TV and radio and Bible colleges.

As an experienced international speaker John has shared The Gospel and spoken to audiences in the tens of thousands across the globe. He also has a heart to train and equip Christians to share their faith and is currently working in several countries to promote ongoing schools of evangelism and evangelism workshops.

Our lord Jesus said in Mark 16:15 To Go into ALL the world and proclaim The Gospel" and we are using the following model to reach as many people for Jesus as we can.

Reaching - by sharing testimonies and The Gospel to the lost via outreach events.

To Support and partner with John in the sharing of the Gospel on a regular monthly basis or as a one off gift then please consider setting up an account with Stewardship Services whom give John full accountability with donations. Just click on the following link

You can also send your donation directly to this bank account

Or the PayPal link below by clicking the logo

I pray that this ministry will only seek to Glorify God through our Lord Jesus Christ and His Holy Spirit.

I pray for boundless opportunities to share the Gospel and to teach the church to do the same.

I pray for wisdom and discernment in all we do, that we may through Him accomplish what He has instructed us to do.

I pray that we seek The Lord Jesus in everything we do.

In the name of Jesus Christ my Lord and Saviour 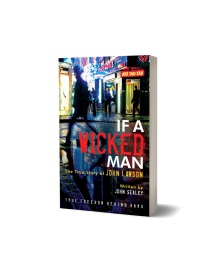 "I believe John's book 'If A Wicked Man' should be in every prison library in the U.K." (Rev Shawn Verhey)

Can you help me to order enough copies of my book to give away freely to every prison? Email me here for details. Or make a donation into the account set up for books for prisoners.